While I was researching my Mother's German ancestors from Alsace, I would occasionally encounter a family name that I was personally unfamiliar with. But a quick Google search would always return several relevant search results with pointers to many historical examples and explanations of each unfamiliar name.

While researching my Father's German ancestors from West Prussia however, I believe I've actually uncovered ancestors of mine with a family name so unusual that it may be virtually unique in history.

A family name so obscure that it left literally no trace for the Google search engine to index. At least until I came along and began writing about it on this website a few years ago.

The family name in question was something like STIGLOWAIT, and it belonged to my 3rd Great-Grandmother Caroline Stiglowait. She was born in 1806 in the tiny community of Klein Niederzehren, West Prussia, near modern-day Czarne Dolne, Poland.

The entire body of evidence for this family name consists of 41 separate hand-written church records that I've personally uncovered by "manually" browsing through images of old Prussian church registers via online services like Ancestry.com and Archion.de.

Each one of those 41 church records documents an important event in the life of one of my direct ancestors (or their immediate relatives) living during the 19th Century: a Baptism, Marriage or Burial. Each record is written in German (with the occasional Latin term thrown in) and stems from one of 10 different German-speaking Protestant churches in the West Prussian districts of Rosenberg, Marienwerder, Löbau, or Osterode.

Although each of these regions were primarily German-speaking at that time (note that Germany was not yet a unified Nation in the modern sense), they all lie within the borders of present-day Poland.

As far as I know, no other written evidence for this family name exists – in any time or place.

Without further ado, here are those 41 references to the name Stiglowait in chronological order. Note in particular the spelling variations in the Family Name column. These various spellings all represent the same family name.

Our sample of 41 documents includes a total of 16 unique spelling variations. Here's the frequency of each variation:

Our sample includes a total of 11 unique locations in which the name was recorded by a church clergyman. Here's the frequency of each location (all of which lie in West or East Prussia):

With 11 unique locations, I strongly suspect we are also dealing with exactly 11 different scribes or clergymen.

Here's a map of modern-day Poland with those 11 locations marked with pins: 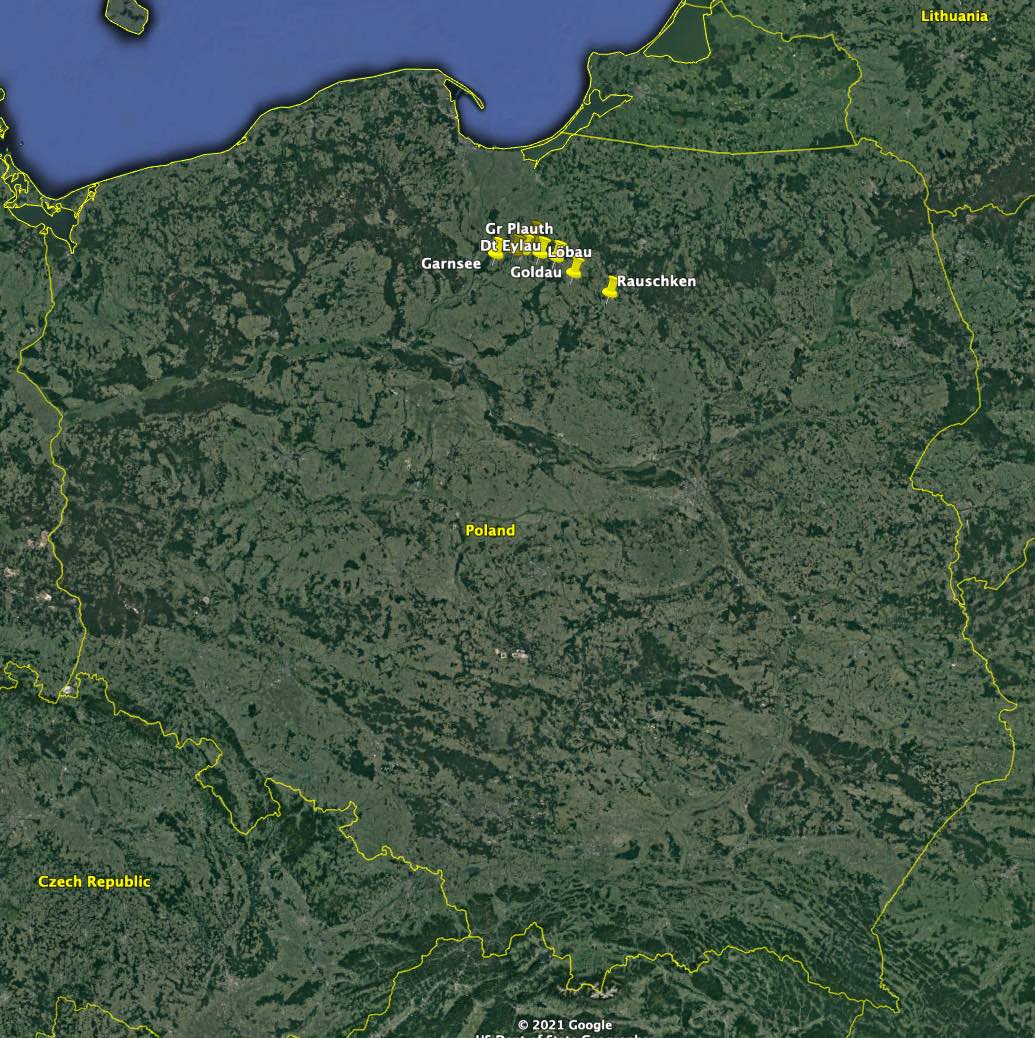 And a closer look:

Those 41 church records document the lives of at least 12 individual people who have carried this family name, all of whom are my ancestors or relatives:

Surely these people had other ancestors and relatives who also carried this family name, but I haven't found any evidence for them. At least so far.

I'll admit that, as a genealogy nut, discovering this family name has been a huge thrill for me. Of all the family names that I've uncovered among my ancestors so far, this family name is my favorite. Simply because it's so weird.

I've spent a fair amount of time trying to uncover the origins (both ethnic and semantic) of this name. And I've asked for assistance from a few experts online who seemed like they might be able to help.

Below is what I've come up with.

Why don't you ask your grandparents?

You might be wondering why I don't just ask my older living relatives about this name – maybe family lore could shed some light on the name and its origins?

Unfortunately in this case, that's not an option.

Not because all of my grandparents are deceased – although they are.

There's another reason that family lore can't help shed light on this mystery. Namely, there's a large rift in my paternal family history.

My 2nd Great-Grandfather, Friedrich Otto Deutschendorf (how's that for a Prussian name?), immigrated to America from West Prussia in 1871 with his wife and my 1-year-old Great-Grandfather Karl in tow. But their plans for a new life in the New World took a tragic turn – within 5 years, Friedrich, his wife and even his wife's sister (who had also immigrated to America) were all dead.

That left my 5-year-old Great-Grandfather Karl stranded on a foreign continent with no living adult relatives. He was raised in an orphanage in Buffalo, New York.

As you can imagine, our family history was essentially lost at that time. Even our difficult family name, Deutschendorf, was mangled anglicized to Ditchendorf.

Not until the internet age has it been possible to fully reconstruct the path my ancestors took from West Prussia to New York. Until recently we were mostly in the dark about their Old World origins.

Okay so we can't expect any help from family lore in solving this mystery. Let's look instead at the individual spelling variations of the STIGLOWAIT name above. We may find some hints there.

A couple of spelling variations stand out immediately: STICHLER and STICHEL.

Stichler is actually a pretty normal German family name. A simple Google search turns up lots of results about its origins and meaning. Stichel is also not so uncommon.

Maybe the mythical STIGLOWAIT family name is just an elaborate mispelling of STICHLER or STICHEL?

I think this simple explanation can be clearly ruled out.

If there were only a small number of attestations of this family name – let's say five – and two of them were spelled as "Stichler" or "Stichel"? Then sure, I could believe that maybe STIGLOWAIT was a mispelling of STICHLER or STICHEL.

On the contrary, it's much more likely that one of the scribes of these 41 documents would have had great difficulty with a bizarre name like Stiglowait – and simply defaulted to writing a somewhat similar "ordinary" name like Stichler as a reasonable and simple solution.

Again, I think STIGLOWAIT as a mispelling of STICHLER or STICHEL can be definitely ruled out.

The next most conspicuous aspect of the list above is probably the commonly-recorded ending : -AIT or -EIT (although sometimes spelled as -AI/-EI or -AŸ/-EŸ).

According to German Wikipedia, -AIT or -EIT are common endings for formerly Baltic names which have been Germanized.

The popular German genealogical Wiki, GenWiki, seems to concur that the -AIT/-EIT ending indicates either a Baltic/Lithuanian origin or at least that the names stem from the Germanized region of East Prussia along the border of Lithuania.

So the -AIT/-EIT ending does seem to indicate at least Baltic influence if not origin.

Given the geographic location of my ancestors, "Baltic" in this instance probably means either Lithuanian or even Old Prussian – the ancient pagan Baltic ethnic group who gave the region its name. The Old Prussians, who were close cousins to the Lithuanians, occupied the area before the Germanic Teutonic Order invaded and were assimilated into the Germanic-dominated Prussian culture of the late middle ages and early modern period. Their language, Old Prussian, was an Indo-European language from the Baltic branch, but it died out in the 18th century.

The excellent 2007 book: "East Prussia: History and Myth" by Andreas Kossert even includes a brief section on "German" East Prussian family names originating near the Lithuanian border which are thought to have Lithuanian or Baltic ethnic origin. He lists the following which all have the -AIT ending:

Others include Adameit and Wowereit – which is familiar to many Germans today due to the rather famous former mayor of Berlin, Klaus Wowereit.

So my current belief is that my West Prussian ancestors listed above had actually recently relocated from somewhere in East Prussia near the Lithuanian border. If so, the STIGLOWAIT name may very well be of Baltic ethnic origin. Mostly likely Lithuanian or even Old Prussian.

However, upon first discovering the odd-looking STIGLOWAIT family name, I initially thought it might be Germanic in origin.

Not only because my Stiglowait ancestors were clearly German-speaking residents of the thoroughly German-influenced area of West Prussia.

The name also seems reminiscent of names like that of the Norwegian Soccer star Håvard Nordtveit or Danish Soccer star Martin Braithwaite. Note the similar endings: -wait vs -veit vs -weite. Given the German pronunciation of the litter "W" (like English "V"), these could be considered essentially identical endings.

Additionally, the (constantly-updating) 23andMe DNA test results of both myself and my uncle report that my paternal line includes a small portion of "Scandinavian" heritage. And so far, I haven't been able to identify any likely Scandinavian ancestors in our known family tree.

Also, given the difficulty I've had tracing my paternal ancestors from West Prussia – which was long the frontier of the German Empire, and therefore generally less well-documented than the more central regions of Germany – it's thoroughly conceivable that I simply haven't yet stumbled upon our first (distant) Scandinavian relative.

I consider the idea that the STIGLOWAIT family name is of Scandinavian origin to be definitely possible, but not terribly likely.

West Prussia was settled not only by Germanic peoples, but also long had a significant Slavic population. In fact, some portions of West Prussia were long inhabited by a Slavic majority.

Not just Poles, but also two closely-related West Slavic groups called Kashubians and Masurians were well-represented in West and East Prussia. And regions dominated by Czechs were of course not terribly far away either.

Perhaps STIGLOWAIT is of Slavic origin?

23andMe indicates a small but significant trace of "Eastern European" DNA for both my uncle and myself. So Slavic is actually possible.

However, I've already discovered an apparent Slavic/Polish ancestor who can explain that expected Slavic DNA contribution: My 2nd Great-Grandmother – the woman who died shortly after immigrating to America in 1871 – was named Florentine Czarnetzki.

But maybe STIGLOWAIT represents yet another Slavic branch in my family tree? That seems possible.

One helpful respondent from an online German genealogy forum suggested the name could perhaps be deconstructed as:

The respondent's suggestion for a possible origin of the Stiglow stem was:

Stíhlov: the former name of a small community in what is now the Czech Republic. The Germans called this community Stieglhof.

And that -OW- (think -OV- in English) middle portion of the name does look suspiciously Slavic in origin.

One important note: If the stem "STIGLOW" – and with it the STIGLOWAIT branch of my family tree – does indeed originate from this small town in Czechia, I don't believe that this necessarily proves they were of Slavic (Czech) descent. Although they might have been.

There's a long history of German settlers and significant German enclaves in eastern regions inhabited by Slavic peoples like Czechia and Poland. This is even evidenced by the fact that the Germans had their own name for the small community of Stíhlov: "Stieglhof".

So if STIGLOWAIT stems from the small community of Stíhlov/Stieglhof in Czechia, I'd say either Slavic or Germanic ethnic origins for this family branch are possible.

So a Slavic origin for STIGLOWAIT seems possible, but I'd also say this theory is far from conclusive.